2008 marked the centenary of Norton Mission Church. Under the enthusiastic direction of the then Vicar, Rev'd Harold Williams, the land, building materials, furnishings and labour were given freely. The little 'Tin Tabernacle' was dedicated in November 1908 and served the community for 80 years. 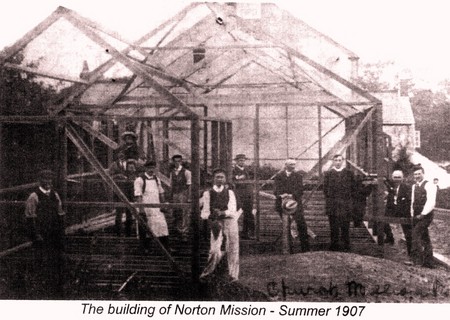 Above is the original painting behind the old Altar, showing the baby Jesus with Mary and Joseph.

By the mid 1980s the Iron Church began to show signs that it had past its sell-by date and the small congregaion was faced with the decision to either call it a day or venture forth in mission. In 1985, under the guidance of Canon Geoffrey Thomas the courageous decision was made to rebuild the hall and, in partnership with the Norton Village Association, to open the building to the community.

After several years of fundraising including a sponsored cycle ride from John O'Groats to Lands End by the then curate Rev'd Bev John and the practical support ofthe local Job Creation project [YTS], the building was completed and officially opened in 1990.