The cost of one firework at Dan Morgan’s exceeded the entire budget of a Gloucester Place Bonfire Night! Nowadays, the last consideration for Guy Fawkes Night is the cost, with the result that large expensive fireworks are abundant and the bonfire of secondary importance, the complete reverse to the old days. There was a social advantage to the old system in that it was customary to set off the fireworks early and finish off the evening around the bonfire. Now, with a surfeit of fireworks, the sky is lit up and the heavens reverberate to deafening explosions until the early hours of the morning (and beyond). 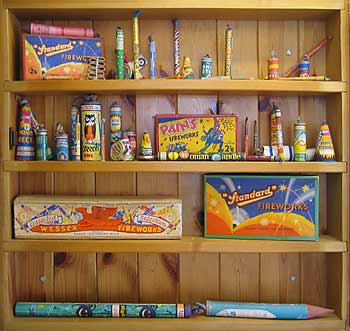 So! After weeks of sacrifice (no sweets) and fervent preparation, the day dawned!

School hours dragged with agonising slowness but ended they did. The Mumbles contingent raced from school, through the Swansea Market, to catch the 4.30 train from Rutland Street to Oystermouth. It was already dark as we tore up Dunns Lane and the distant bang, crackle and whop of fireworks, announced that Guy Fawkes Night 1938 was already underway! 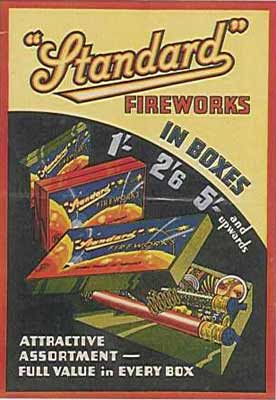 Tea was bolted and friends met up in the street. The Balsdons, the Rossers, the Hullins, the Ways, the Timothys, and a hundred others, assembled in the back yard of the Victoria Inn, my home. My brother Colin and his inseparable pal, Trevor Jones, were putting the last touches to the unlit fire, materials for which had been so laboriously collected and assembled over the weeks.

This year, my father, Glyn Maggs, had restricted, to a positive limit, the size of the fire, the reason being that in the preceding year, the fire stoked up by Buster David and Jackie Timothy and got a little out of hand. The recently painted frontage of the house had had all the paint blistered and the upstairs windows had cracked which upset my father a bit. As a result there was a crisis of confidence in my ability to control things and as Dad had always had an innate fear of being rendered homeless, he had made this stipulation.

The evening was soon under way and fireworks were discharged with the usual abandon amidst the shouts and screams of excited kids. Hair was singed and hands scorched. Eardrums nearly ruptured and as always, a little one screamed because his sparkler had burned his fingers.

The privilege of lighting the fire went to the chief collectors and, so simultaneously, Ivor Jones and Trevor, Colin Maggs and Jackie Timothy struck their matches and set light to the periphery.

The fire soon took hold and the flames burrowed rapidly in, creating sparks that rose on the thermals, through the smoke, up and up, into the cold sharp, star filled night. Whoops of delight were heard all round and excited young faces were seen, lit up in the glow.

Potatoes appeared from somewhere and were placed in the glowing embers at the edge of the fire. Within an hour, these were grubbed out, and gingerly wrapped in paper. The charred skin was removed and the scalding flesh of the potato eaten with relish and washed down with hot, sweet cocoa from huge jugs brought in by anxious Mums ( so relieved to see that their small ones had again survived a Guy Fawkes night without losing a limb or a head of hair).

Guy Fawkes Night 1938 was coming to a close. The night air was hazy with sulphurous smoke and, still, in the distance could be heard the odd late hiss of a lone rocket ending on a sad pop.

Ever the organiser, Jack Timothy raked the smouldering embers, searching for a lost potato and then throwing the embers back on to the dying fire to resuscitate the flames for a few more precious minutes.

But, it was all over.

Cries of “Come on Bryn!  Come on Elaine!  Come on Alan!  Come on Colin!  School tomorrow!”

It was past 9.30 and, wearily, the children made their way home. It was time for quiet to descend again across Mumbles. The last banger had been lit, the last rocket launched across the village and it was time to give the hard working villagers the peace they deserved, for a fair night’s rest. These were the days when consideration for neighbours was an accepted way of life, what was taught in Sunday School was put into practice. There would be no middle of the night explosions.I walked down Gloucester Place with my life long friends, Jackie Timothy and Alan Rosser. Unanimously, it was voted the best Guy Fawkes’ night yet!

Only 52 weeks to the next one!

Three young lads and not one of us, in our wildest dreams, could have foreseen that the next one would not come and that this Bonfire Night of 1938 was the last one we would enjoy as youngsters.

Within a surprisingly short space of time, Flight Sergeants, Alan Rosser and Jack Timothy found themselves flying over hostile territory, in the rear gun turrets of Lancaster Bombers, gazing down on a conflagration of a different, terrifying kind.

back to part one